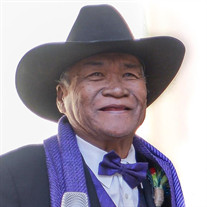 On Monday, March 1, 2021 the Castillo family lost their hero, Armando Castillo. His body decided that his time here was over, and his soul needed to head out on its next adventure free from the physical constraints he had graciously endured. Armando was born in the Philippines in the barangay of Palacpalac, Victoria to Felicisimo and Marcelena Castillo on June 21, 1958. Brave and bold since youth you could find him fearlessly waltzing on the dance floor with skill, confidently belting out a melody at the head of a parade or simply enjoying life on the back of a carabao. Soon he would leave all this behind and start his next chapter in America. Life took him to Los Angeles for college, here fate would take his hand, as it was here that he met the love of his life, Susan. From dancing on American Bandstand to spending days fishing at the Santa Monica pier, they shared love and life. It was on the steps leading from that pier to the beach that Armando asked Susan to marry him. They’d go on to have three daughters. Even though he started off hoping for a few boys, he got all girls; and he couldn’t have been happier. Armando loved all his girls, and they all loved him dearly. He graduated with a degree in Finance and went on to work for Ernst & Young as an auditor, then a financial planning and analysis manager at Ruiz Foods. Later in life he would start his own business A & S Consulting which provided financial and transportation management consulting services. Armando led a life full of determination and compassion, he didn’t let the loss of his kidneys stop him from living, working, and enjoying life. He loved dancing with his wife, singing karaoke, guiding his daughters, golfing, fishing, cooking for family, challenging himself mentally, helping others and eating one too many sweets. He could do anything he put his mind to, even though his body tried to convince him otherwise. He was so strong, from the beginning of his life to the end. Armando was the rare kind of person that made people around him better for having known him. He is survived by his wife and partner in life Susan; his three girls Michelle, Sheila and Marcelina; his four grandchildren Fox, Kathryn, Noah and Devin; and many more family members who will miss him dearly, the space he leaves behind is only dwarfed by the love he leaves in our hearts. Funeral Services will be held at 2pm Saturday, March 27, 2021, at The Chapel of The Light, 1620 W. Belmont Ave., Fresno, CA 93728.

On Monday, March 1, 2021 the Castillo family lost their hero, Armando Castillo. His body decided that his time here was over, and his soul needed to head out on its next adventure free from the physical constraints he had graciously endured.... View Obituary & Service Information

The family of Armando Castillo created this Life Tributes page to make it easy to share your memories.

Send flowers to the Castillo family.