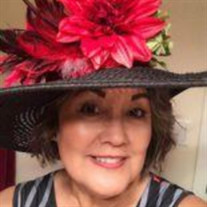 Bebe Briceno Bartley was born Idalia Marie Briceno, on August 19, 1954, in Merced, CA. She passed on March 2nd , 2022, following a two-year battle with Ovarian Cancer. Bebe, a 67-year-old Fresno resident, was the eldest of three siblings born to Vince and Joyce Briceno, and was raised in Chowchilla, CA. She attended Stephens Elementary, Fuller Elementary, Wilson Middle School, and later graduated from Chowchilla Union High School in 1972. Bebe was remembered fondly by many as a sweet and quiet classmate. After graduation, she met her future husband, Kenneth Bartley, while working in the first of many supermarkets. From that marriage she gained two stepsons, David and Noel Bartley. After giving birth to their only daughter, Angela in 1979, Bebe and Ken relocated to Wishon, CA, in the Sierra Nevada mountains where they both worked on the historic Helms Project. Following their divorce, Bebe remained in the area, settling in Prather, CA, while managing the only gas station in town, The Tiny Mart. She also attended beauty college and simultaneously worked in a salon as a manicurist. During this time, she met her long term significant other, Mike Wilson, whom she spent more than a decade with, and gained two bonus sons, Matthew Yandell and Marc Wilson. She developed a deep love of horse racing after many trips to various horse sales and races. One of her favorite yearly events was The Kentucky Derby. Bebe took extraordinary joy in wearing the flamboyant hats and being able to pick the winning horse many years running. In the late 1990s, Bebe began her 25-year career with Smart & Final and relocated to Clovis, CA. She began attending church regularly and was baptized in a hot tub as a born-again Christian, along with her best friend Marti Salinas. Bebe purchased her first home in 2002, in Fresno, CA. There she hosted many family gatherings, bible studies and even operated her nail business for a short time. Bebe became a grandmother in 2010 when her granddaughter, Eliza Paige was born. She became a grandmother once again in 2013 after the birth of her second granddaughter, Marley Sage. Being a grandmother was the greatest joy of her life. She immersed herself in the role and wore the title of “Grammy” with pride and honor. She was diagnosed with Ovarian Cancer in January 2020 which prompted her to retire as an Area Trainer with Smart & Final a few months early, whereupon she chose to begin her Chemotherapy reatments with faith and bravery. She is preceded in death by her Nephew Vincent Michael Exzquio Briceno III, bonus son Matthew Yandell, Father Vince Briceno Senior, and her beloved companion dog, Jolene. She is survived by her daughter, Angela Norgard, granddaughters Eliza and Marley Norgard, mother, Joyce Briceno, siblings and their spouses Rebecca and Rene Lastreto, Vince Briceno Jr. and Angela Gamino, nieces and their spouses SarahBeth and Callan Eller, Amanda Percy, and Sheena Briceno, great nieces and nephews Sohni Macaroni Chohan, Ethan Atherton, and Gwyneth Atherton, Michael Joseph Jackson Percy, and Roman Michael-Briceno Mitchell, bonus son Marc Wilson and of course, her newest fur-baby Chloe. A Celebration of Life will be held on April 10th at Fort Washington Country Club in Fresno, CA from 10am-3pm. Brunch will be served from 10am-1:30pm. All are welcome to attend, but RSVPs sent via text to Angela Norgard at 559-304-3145 are strongly encouraged. Please note: The family requests Kentucky Derby attire be worn (hats, ties, etc.). Also, per country club rules blue denim is not allowed. In lieu of flowers, please make donations to any of the following non-profit organizations in her honor: Hinds Hospice Ovarian Cancer Research Alliance St. Jude’s Children’s Research Hospital

The family of Bebe Briceno Bartley created this Life Tributes page to make it easy to share your memories.

Send flowers to the Bartley family.