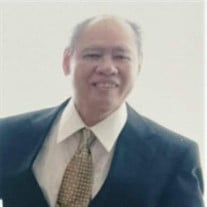 Mr. Celso Manuel Medrano, Jr. was born in Echague, Isabela Philippines on September 3, 1934. He was 86 years old. He joined our loving Lord peacefully on December 31, 2020 at 5:15 PM at Community Regional Medical Center in Fresno, California. While confined in the hospital, he received his last rites by Father Abraham of Fresno, CA and Virtual (Zoom) pray over by Father James Kofski, from New York and Father Dhoy from Delano, California. The family and relatives in the US, Canada and the Philippines had a “Virtual Zoom Viewing” with prayers on December 31, 2020 immediately after his death. As part of customary Filipino tradition, a nine-day prayer novena service was conducted from Jan 1, 2021 to Jan 9, 2021 by his family, relatives and friends from all over the world. A nine-day Holy Mass was also offered for him in the Philippines. Celso Jr. was the 5th child of a family of 8 children. His father was the late Mr. Celso Atienza Medrano, Sr., a University of The Philippines (UP) College of Forestry graduate and his mother, the late Mrs. Josefina Manuel Medrano, a grade school teacher. He spent his early years growing up with his family in Claveria, Cagayan, Philippines in Northern Luzon. Celso, Jr. was a humble and caring man who lived modestly and was very religious. He was raised in the catholic faith by his parents who were devout practicing Catholics. He prayed the rosary daily and frequently prayed for everyone all the time especially for his parents and siblings. In his younger days, he loved to go to the beaches of Claveria to swim. Celso was quite sociable and loved to go out and attend parties especially with family and relatives. He also enjoyed listening to Ilocano and religious music and TV programs. After migrating to the US with his parents, Celso became a US citizen. He was single and never married. He lived with his sister Nena, her family and his parents in Downers Grove, Illinois, US for several years. When his parents died, he continued to live with his younger sister, Nena and visited his late brother Romy and family and late brother Billy and family in Illinois and his sister Auring and family in Canada. In 2010, he joined Art, Sr. & Nena in Coarsegold California. After 6 years, due to an illness that required constant care, he moved to an assisted living facility in Fresno, California. During that time, he communicated with his sister Nena on a daily basis and she frequently visited him, ran his errands and accompanied him to all his doctors’ appointments with Art, Sr. assistance. He was visited by several family members throughout the years and found great happiness and comfort from their loving visits always greeting them with a kind smile and at times tears of joy. Celso, Jr. is survived by his sister Mrs. Lourdes (Nena) M. Nisperos, Dr. Arturo G.Nisperos, Sr. (Brother-in-law), his older sister Mrs. Aurora M. Bangcaya in Toronto, Canada, Mrs. Tina N. Medrano (Sister-in-law) in Naperville, Illinois, his many nieces, nephews and other relatives in US, Canada and Philippines. The rest of his 5 siblings have passed away, Dr. Ben Medrano, Juanita Medrano (died at Infancy), Engr. Romulo Medrano, Engr. Isabelo Medrano, and Celia Medrano died at age 12, including his Sister–in-laws, Mrs. Alice R. Medrano, Mrs. Adela L. Medrano and Mr. Pete Bangcaya, brother-in-law. Viewing and Liturgical Services will be held at the Chapel of the Light Funeral Home, 1620 W. Belmont, Ave. Fresno, California 93728, on Friday, January 22, 2021 from 2:00 - 4:00 PM. His wish was to be buried in the tomb, together with his parents at the Medrano Mausoleum in the Catholic Cemetery in Claveria, Cagayan Valley, Philippines. Due to travel restrictions, he will be cremated and when travel opens up, he will be flown to the Philippines for his final resting place. May Celso, Jr. rest in peace with our Lord in heaven. We love you and will miss you very much. We thank everyone for all your prayers for the repose of the soul of Celso M. Medrano, Jr. For: Celso Manuel Medrano, Jr. Memorial Service DateFor: Celso Manuel Medrano, Jr. Memorial Service Date: Friday, January 22, 2021 Chapel of the Light Funeral Home 1620 W. Belmont Ave., Fresno , CA 93728 www.chapelofthelight.com Time : 2:00 PM to 4:15 PM ( PST) 4:00 PM-6:15 PM (CST) 5:00 PM- 7:15 PM ( EST and Canada) 2:00 PM-2:30 PM ( PST) - Visitation 2:30 PM- 4:00 PM (PST) -Liturgical Service 4:00 PM-4:15 PM (PST) - Visitation For those that are not able to be at the Funeral Home in Person, Virtual ( Zoom) is available: Meeting Code: 883 1091 3279 Passcode : 838786

The family of Celso Manuel Medrano, Jr. created this Life Tributes page to make it easy to share your memories.