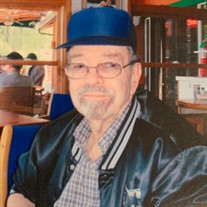 On Monday, June 1, 2020, the Thomas family lost their beloved Dad and Papa Fuzzy, Denzil “Denny” Thomas, unexpectedly due to a sudden septic blood infection that quickly took his life. His family was relieved to know he passed suddenly without pain. He went on to be with his Lord and Savior Jesus Christ, whom he loved deeply. He lived a long and eventful 87 years, and was with his family when he passed. Denny passed away in Clovis, CA where he lived for the last 7 years of his life. He spent the majority of his life in Fresno, CA. Denny was born on May 7, 1933, in San Jose, CA and was raised by his mother Norma and father Clarence “Tuffy” Lindstrom, in Avenal CA. He grew up working in agriculture with his dad and loved raising pigs and chickens on the family ranch. Denny graduated from Central Union High School in Fresno, CA in 1952, and volunteered to serve in the Army during the Korean War. He started his military career at Fort Ord Monterey, CA, and then shipped to Korea where he served in the Tanker Co., 32nd Infantry Division. He spoke frequently of his time in Korea, mostly about how cold it was and the long hours of standing guard in the freezing temperatures. He earned the National Defense Service Medal, the Korean Service Medal, the UN Service Medal, and the Good Conduct Medal. The family is honored to have a father and a grandfather serve our country so bravely. When he safely returned home at the end of the war in 1955, he earned a certification from ABC Business College. He then went on to graduate from the Fresno School of Barbering and worked as a barber for his entire career. He had several hobbies that he enjoyed, including archery, golf, target shooting, crossword puzzles, darts, iPad games, and model-making (ships, airplanes, cars.) He was an avid gun collector, mostly of older model war guns, rifles, and air guns. He especially loved fishing and favored the Kings River as well as other lakes and rivers in the Fresno and surrounding areas. He told many stories of his days fishing and even taught his 2 young daughters how to fish as well. Although Denny was a marksman shooter, he was a very gently soul and did not enjoy hunting, rather honing his skills through target shooting. Denny had an uncanny memory and was able to recall many thangs from his long life as well as facts that most would have never remembered, up until the end. He loved watching classic movies and knew a lot about Hollywood movie stars that he shared and passed on to his daughters. Denny was a very “hip” resident at the nursing home he lived in using technology better than many much younger residents than he was. He was much loved there and had made many good friends. Anyone who knew Denny knows that he is loving, patient, sensitive, and a gentle man. He had a wonderful quick wit and a great sense of humor, which he had until his last days. He always stood up for himself, but never wanted to hurt anyone’s feelings. Denny was a single father in the 1960’s, being both mother and father to his daughters, and was truly the Patriarch to the Thomas family. Denny is survived by his 2 daughters, Tina Robertson and Lisa Lynn and son-in-law Marco Lynn, his grand-children Klariza Lynn, Amy Thomas, Tanya Wolf, Anthony LeBar, and Nathan Martin, his great-grandchildren, Destiny Wong, Alexis Zuniga, Janessa Zuniga, Robert Thomas, Azlynn Castelberry, and Harvey Martin, his great-great grandson Robert Thomas Jr., his nieces Jennifer and Lori Haugen and their children, and cousins Ernest, Ted, and Phillip Lindstrom. He was proceeded in death by his parents Norma and Clarence “Tuffy” Lindstrom, his sister Susan Haugen, and his son Denzil “Dean” Thomas. There will be a reception following the service. Please consider wearing face coverings and practice social distancing.

On Monday, June 1, 2020, the Thomas family lost their beloved Dad and Papa Fuzzy, Denzil &#8220;Denny&#8221; Thomas, unexpectedly due to a sudden septic blood infection that quickly took his life. His family was relieved to know he passed suddenly... View Obituary & Service Information

The family of Denzil "Denny" Thomas created this Life Tributes page to make it easy to share your memories.

Send flowers to the Thomas family.