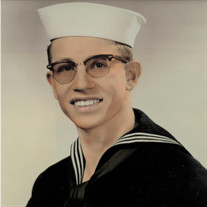 Dr. Carl David Waddle passed away in Fresno on December 26, 2021, at the age of 83. He was preceded in death by his wife, Dixie Lee Simpson Waddle, his parents Everett Austin Waddle, and Pencie Evelyn Hefner Waddle of Farmersville, and his brothers Duain Waddle and Johnny Waddle. Carl was born September 25, 1938, in rural Clinton, Arkansas. After moving to California in 1953 he attended Exeter Union High School (class of 1955). At the age of 17 Carl worked at Sprague Electric in Visalia where he helped design and build the electrical system for the first American Satellite, his name is carved in a junction box and will forever remain in space. He attended College of the Sequoias in Visalia for a brief time. He then enlisted in the Navy in 1956 where he served as an electronics technician based out of Treasure Island, California before being deployed on the USS Charles R. Ware, a Gearing-class destroyer. During his time at sea, he corresponded with his high school sweetheart, Dixie Lee Simpson, who was finishing her college education at the time. The two married after his completion of military service, and her graduation from Fresno State University in 1960. After they married, Dixie began teaching elementary school, and Carl completed his undergraduate work at San Jose State University (class of 1964). He followed his undergrad work with a Master’s degree in Linguistics from San Jose State University (class of 1965). Carl started working as an assistant professor at Fresno City College that same year. He completed two PHD’s at the Jaime Balmes University in Guadalajara Mexico, one in Philosophy the other in Spanish Linguistics (class of 1971). For 50 years, Carl was a beloved educator and Dean of Humanities at Fresno City College. His passion for linguistics and helping his students and faculty served him and others well. He was a published author and a true renaissance man, but his heart was always in education. He also graduated from the Nursing program at Fresno City College in 2000 and became a registered nurse. He used his knowledge and skills to help build the Fresno City College Nursing program into what it is today as well as donating his time to the health and wellbeing of diabetics in the Mexican American community. He fostered and understood the positive impact thousands of students would have on the world at large for years to come. He is survived by 6 nephews and 4 nieces, and 3 God children. He looked forward to rejoining Dixie, his wife and high school sweetheart. He said in her obituary “I will cherish our memory and anticipate, by God's Grace, our joyful reunion”. Carl was a communicant at St. George Greek Orthodox Church in Fresno. Funeral Service will be held on Wednesday, January 12, 2022, at St. George Greek Orthodox, 2219 N Orchard St, Fresno at 10:00am. Graveside Services will follow immediately after the funeral at Mt View Cemetery, 1411 W Belmont Ave, Fresno at 11:30 am. A live stream may be seen at this link: https://www.facebook.com/stgeorgegreekorthodoxchurch/

Dr. Carl David Waddle passed away in Fresno on December 26, 2021, at the age of 83. He was preceded in death by his wife, Dixie Lee Simpson Waddle, his parents Everett Austin Waddle, and Pencie Evelyn Hefner Waddle of Farmersville, and his brothers... View Obituary & Service Information

The family of Dr. Carl David Waddle created this Life Tributes page to make it easy to share your memories.

Send flowers to the Waddle family.