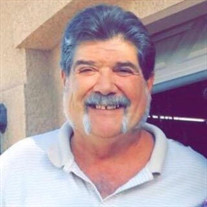 Everyone has a story, Eddie's was full of them, filled with love, family, many friendships and lots of good times to be remembered. It all began February 24, 1959 in Fresno, Ca. He was the first born son to Ron & Mary Costa. He grew up with two brothers, Mikey & Danny and two sisters Barbara & Anna. What adventures they had. As the oldest he was a bit of a trouble maker but could do no wrong in his mom's eyes. Eddie met the love of his life, Lisa, in 1982 and married on February 14, 1988. Together they shared 6 children, Christopher, Jennifer, Anthony, Eddie, John and Rhiley. He was a devoted, loving and caring husband. He loved his family deeply and always worked hard to provide for them. He was blessed to have 9 grandchildren, Matthew, Serenity, Madison, Christopher, Bella, AJ, Ellie and Scarlett and 1 great grandson, Isaac. They were the center of his world. He made sure each one of them knew how much their Papa Ed loved them. Eddie had many more 'extended' sons & daughters as so many affectionately called him Papa Ed. Eddie made his career at Pombo's Automotive for nearly 40 years as a diesel mechanic . His knowledge of mechanics was unmatched. If you had car trouble he was the one to call. He always made the time to help out a friend. He was also a skilled welder, learning from his father early on. To say he was passionate about racing was an understatment. Anyone who has stepped foot in his garage knew this instantly by the endless posters and racing photos that covered the walls. And if you stayed long enough he was sure to tell you the story behind each one of those pictures. He was proud to be a part of many pit crews and spent countless days at Hanford, Santa Maria and Madera Speedways. Some of his grandson Matt's favorite memories were at the Pombo races with Papa Ed. His family and friends were truly his main source of happiness. He had a genuine love of people. He connected with everyone he met, neighbors, distributors, customers, even ones just passing by his garage. He would pull you in with his stories and made such a lasting impression. He might have been a little rough around the edges at times, I'm sure you have your own stories to tell but you have to agree he was just as much loving as he was tough. He had a heart of gold but he wasn't one to be reckoned with. A man like Eddie doesn't come along very often. We are very thankful to have know such a man. If you would like to view the Funeral Service via Zoom, you may click this link :https://us02web.zoom.us/j/81828582709 Due to Corona Virus, we ask those attending to be responsible and maintain a safe social distance. Masks are a requirement. Please contact the family for restrictions and information

Everyone has a story, Eddie's was full of them, filled with love, family, many friendships and lots of good times to be remembered. It all began February 24, 1959 in Fresno, Ca. He was the first born son to Ron & Mary Costa. He grew up with... View Obituary & Service Information

The family of Edward Ronald Costa Jr. created this Life Tributes page to make it easy to share your memories.

Send flowers to the Costa family.