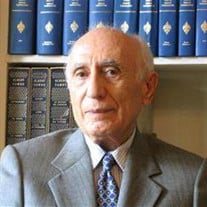 Dr. Ehsan O. Yarshater, an Iranian historian and linguist who specialized in iranology passed away peacefully in Fresno, California at the age of 98. Born in Hamedan, Persia (Iran), Ehsan Yarshater studied Persian language and literature at the University of Tehran and Iranian philology (Old and Middle Iranian) at the School of Oriental and African Studies (SOAS), University of London with Walter Bruno Henning. His Tehran University dissertation dealt with Persian poetry under the Timurid Shahrukh (15th century). His University of London dissertation, elaborated and published later as A Grammar of Southern Tati Dialects (Mouton, 1969), describes a series of Tati dialects spoken in the southwest of Qazvin. His dissertation proposes that the language of the native people of Azarbaijan in Iran was Tati, not Turkish. He was the first Persian full-time professor at a U.S. university since World War II. Dr. Yarshater was one of the 40 editors of the Encyclopædia Iranica, with articles by 300 authors from various academic institutions. He also edited the third volume of the Cambridge History of Iran, comprising the history of the Seleucid, the Parthians, and the Sassanians, and a volume entitled Persian Literature. He was also an editor of a sixteen-volume series named History of Persian Literature. He had won several International awards for scholarship, including a UNESCO award in 1959, and the Giorgio Levi Della Vida Medal for Achievement in Islamic Studies from UCLA in 1991. Lecture series in his name have been instituted at the University of London, and the University of California, Los Angeles, and at the Centre National de Recherche Scientifique in Paris.He was the founder and director of The Center for Iranian Studies, and Hagop Kevorkian Professor Emeritus of Iranian Studies at Columbia University. Family and Friends are invited to honor Dr. Yarshater at a viewing to be held in Fresno at Chapel of the Light Funeral Home on Thursday, September 6, 2018 from 1:00 p.m. to 6:00 p.m. A Funeral Service will be held in New York at the Frank E. Campbell - The Funeral Chapel on Wendesday, September 12, 2018 at 10:00 a.m. Interment will follow at Kensico Cemetery in Valhalla, NY.

Dr. Ehsan O. Yarshater, an Iranian historian and linguist who specialized in iranology passed away peacefully in Fresno, California at the age of 98. Born in Hamedan, Persia (Iran), Ehsan Yarshater studied Persian language and literature at... View Obituary & Service Information

The family of Dr. Ehsan O. Yarshater created this Life Tributes page to make it easy to share your memories.

Dr. Ehsan O. Yarshater, an Iranian historian and linguist who...

Send flowers to the Yarshater family.