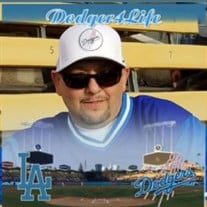 Eric Richard Guerra was a caring husband, father, brother, cousin and friend. He left this world suddenly on December 28, 2021 at the age of 50. It is with deep sorrow and much love that we mourn his passing. Eric was born in Fresno, California. He attended Roosevelt High School and worked for over 20 years as a commercial transit driver with Fresno Area Express, Greyhound, and Yarts. Eric was known for his quick wit, infectious laugh, and his kind and compassionate spirit. He enjoyed spending time with family, he was our barbecue master chef, he enjoyed playing horse shoes, corn hole, and going up the hill to “visit” the casino(s). He was a dedicated fan of the Raiders and Dodgers. He cheered on his teams with incredible enthusiasm and dedication. He attended games and was known for his great sense of humor. He would joke about the opposing teams and make sure the family members who cheered for those teams knew. It was well known if the Raiders or Dodgers were playing, the family group chats would be lit up with texts from Eric, promoting the Raiders or Dodgers. Eric also enjoyed traveling and would take spur of the moment trips. Recently he traveled across the states of Oklahoma, Texas, New Mexico, and Arizona. Eric was preceded in death by his grandparents Steve and Annie Guerra, uncle Donald Guerra, and aunt Debbie Diaz. He is survived by his wife Nerissa Guerra, his three children Erica Guerra, Eric Guerra Jr., and Navaeh Guerra. His grandson Royal Guerra. His father Gary Guerra, his mother Linda Lopez, his brothers Gary Guerra Jr., Mathew Ramirez, Adrian Ramirez, and Roger Lopez, his sisters Kristy Torres and Stephanie Guerra, and cousins Bryan Guerra, Richard Diaz Jr., and Michael Diaz. A Viewing and Visitation will be on Thursday, February 10, 2022 from 5:00 - 8:00 pm. The Funeral Service will take place at 6:00 pm at Chapel of the Light Funeral Home. A Graveside Service will be on Friday, February 11, 2022 at 11:00 am at Fowler Cemetery.

Eric Richard Guerra was a caring husband, father, brother, cousin and friend. He left this world suddenly on December 28, 2021 at the age of 50. It is with deep sorrow and much love that we mourn his passing. Eric was born in Fresno, California.... View Obituary & Service Information

The family of Eric Richard Guerra created this Life Tributes page to make it easy to share your memories.

Send flowers to the Guerra family.