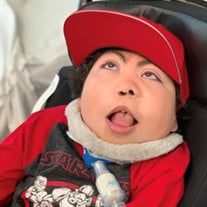 Our Eric "Ryan" Rodriguez was born July 6, 2004 in McAllen, Texas weighing 1lb 10oz. From the day he entered this world he was proving the medical community wrong & did it in style. Born with a rare birth condition called Holoprosencephaly (HPE), he was not supposed to life passed birth, let alone live to be 16yrs old. Everyday of his short life was a fight for him. Things we all take for granted like walking, talking & eating by mouth were things that would never be for him here on earth, but that didn't stop him from living a full life. Ryan was surrounded by family from near & far and loved by all who crossed his path. Not one person who met him, were ever the same. Ryan had many experiences in his life, but the greatest was hi Make-A-Wish trip in 2019 on a Disney Cruise to the Bahamas, memories we will have for our lifetime. Ryan attended a special needs school, where he stole the hearts of many, constantly being told he was the best dressed kid and attended events such as proms & fields trips. For someone with no words, his facial expression spoke volumes and made it very clear to all what he did & did not want to participate in. Ryan was active in the HPE community, traveling to conferences in Indianapolis & Dallas where he met others with his condition, giving hope to families from all across the country. Ryan is survived by his parents Eric &Abby, siblings Jazmin, Dom & Ava, grandparents Art, Norma & Janie and several tias, tios, cousin & extended family. Ryan has earned his perfect body, no longer having to fight, walking, running & dancing through the streets of heaven. He will forever be missed, but never forgotten. Fly high Ry-bred, we love you & will miss you always.

Our Eric "Ryan" Rodriguez was born July 6, 2004 in McAllen, Texas weighing 1lb 10oz. From the day he entered this world he was proving the medical community wrong & did it in style. Born with a rare birth condition called Holoprosencephaly (HPE),... View Obituary & Service Information

The family of Eric Ryan Rodriguez created this Life Tributes page to make it easy to share your memories.

Send flowers to the Rodriguez family.