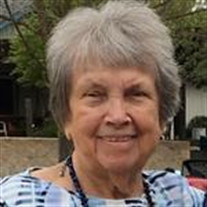 Evelyn passed away in Fresno on May 22, 2021 at the age of 87. Born May 24th, 1933, in Fresno, California to the late Herbert and Esther Sanderson, Evelyn was the sixth of eight children. She was the youngest of three girls. Evelyn graduated from Roosevelt High School and attended Fresno Junior College. She worked at Nurmi’s Bakery when she met her future husband, Don. Their first date was at a basketball game. When Evelyn was seventeen, she married Don Barclay on February 10, 1951. Three children were born from this union. During the early years of her marriage, Evelyn worked at Sun Maid Raisin Company in the accounting department. She made the decision to stay at home and raise her three children. After the children grew up, Evelyn worked at Pre-Sort for a few years. Evelyn was an avid bowler. She bowled at least twice a week. She received many bowling pins and trophies over the years. She enjoyed working with pottery and macramé. Evelyn was also family oriented. She spent many summers camping with her family in Wishon. Evelyn would also host most of the family get-togethers. As a Christian woman, Evelyn was very devoted to God. She spent many years studying with Bible Study Fellowship and completing the Bethel Series. She also was a member of Northwest Church for many years. Evelyn preceded in death by her parents and her husband, Don. She is survived by three children: Terry Barclay of Gresham Oregon, Peggy Murphy of Fresno, California, and Megan Konior of Fresno, California. Grandchildren: Michelle Greer, Melinda Webster, Timothy Barclay, Angela Barclay, Joshua Konior, Keith Konior, Amanda Konior, and Kyle Konior. Great Grandchildren: Teagyn Greer, Hunter Greer, Cord Greer, Nathan Webster, and Emily Webster. She is also survived by her brother, John Sanderson. A Celebration of Life is planned for Evelyn on June 18th, 2021 at 11:30 am. It will be held at Chapel of the Light 1620 W. Belmont Ave. Fresno, Ca. 93728

Evelyn passed away in Fresno on May 22, 2021 at the age of 87. Born May 24th, 1933, in Fresno, California to the late Herbert and Esther Sanderson, Evelyn was the sixth of eight children. She was the youngest of three girls. Evelyn graduated... View Obituary & Service Information

The family of Evelyn Barclay created this Life Tributes page to make it easy to share your memories.

Send flowers to the Barclay family.