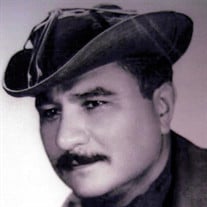 Gene Marcello Gallegos, 91, passed away peacefully at his home on November 27, 2021. Gene was born on October 25, 1930, to Julian and Amalia Gallegos in Orchard Mesa, Colorado. Gene grew up in Grand Junction, Colorado, graduating from Grand Junction High School in 1949. Gene married Delphie Roybal on October 20, 1951, in Albuquerque, New Mexico, and recently celebrated 70 years of love and marriage. Gene joined the US Air Force in 1950 and made a career of 27 years serving his country. Along the way, all nine of his children were born and lived on Air Force bases all over the world, including Turkey and the Philippines. After retiring from the Air Force in 1977, Gene moved his family to Fresno, CA where he started his second career as a tax examiner with the Internal Revenue Service. After 20 years with the IRS, Gene retired from official duty for the last time. Gene was an avid golfer and basically liked any sport that rolled or bounced. He would cheer on football teams, college and pro, that his children and grandchildren enjoyed including the Denver Broncos, Green Bay Packers, Dallas Cowboys, Fresno State Bulldogs and sadly, the 49ers. Gene will be missed by his wife, Delphie and seven of his children: Anna Gallegos Hunt (Jeff Hunt), Lucy Zick (Tim), David Gallegos, Mary Lou Gallegos, Cathy Warner, Timothy Gallegos (Annette) and Rebecca Gallegos (Danny Zingarelli). Gene is survived by his sister, Eva Fruit, brother, Joe Gallegos, sixteen grandchildren, four great grandchildren, one great-great grandchild and many nieces and nephews. Gene Gallegos was preceded in death by his son Michael Gallegos, daughter Tina Brown and grandson William Nieves. Memorial services will be held on December 16, 2021 at Chapel of the Light, 1620 W Belmont Ave, Fresno, CA. Visitation 11:00 am, funeral service 11:30. Burial with Military honors to follow at St Peter’s Cemetery, 264 N Blythe Ave, Fresno, CA.

Gene Marcello Gallegos, 91, passed away peacefully at his home on November 27, 2021. Gene was born on October 25, 1930, to Julian and Amalia Gallegos in Orchard Mesa, Colorado. Gene grew up in Grand Junction, Colorado, graduating from Grand... View Obituary & Service Information

The family of Gene M. Gallegos created this Life Tributes page to make it easy to share your memories.

Gene Marcello Gallegos, 91, passed away peacefully at his home...

Send flowers to the Gallegos family.