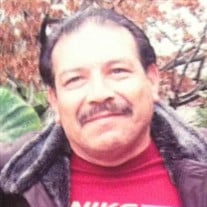 George Avalos, Sr. passed away on Wednesday, July 21, 2021. George was born on July 21, 1952, to Gregorio Avalos and Jovita Martinez Avalos in Riverdale, California. He was the twelfth of their fourteen children. He met Mary Avalos in high school... View Obituary & Service Information

The family of George Martinez Avalos created this Life Tributes page to make it easy to share your memories.

Send flowers to the Avalos family.