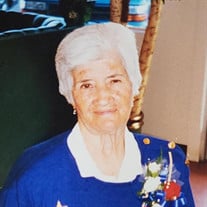 Guadalupe Ramirez Munoz Age: 98 years old Surviving Children: Elias R. Munoz, Mario R. Munoz, Janie Munoz-Tafoya,and her husband, Jose Elieser Tafoya and George R. Munoz, Sr. and his wife, Amelia G. Munoz. Her surviving sisters are: Feliciana Ramirez, Maria Guadalupe Ramirez, Maria Elena Ramirez and Yolanda Ramirez. Preceded in Death: Her husband of over 50 years, Apolonio Munoz, Sr. , her children: Robert Munoz, Maria del Rosario Munoz, Blanca Estela Munoz and Apolonio Munoz, Jr. Her parents: Fortino Ramirez and Esperanza Pavon. Her siblings, Juan Ramirez, Jose Ramirez, Tranquilino Ramirez, Sr., Rosa Ramirez, Victoria Ramirez and Edelmira Ramirez. One event in her life that she was very proud of was when in 1996 she successfully passed her test and became a U.S. citizen. She was also proud to be the mother to three sons who served in the US Army, one veteran of Vietnam war, another the conflict in Korea and the other who served for more than 20 years in the U.S. National Guard. Guadalupe was not afforded the opportunity to go to school as a child in Mexico as her family couldn’t afford it. Her original signature was an “X”. In her 50’s she attended adult school at Sequoia Jr. High. She learned to write her name and sign her name in cursive. Even though she was not formally educated, she was very smart, and a great cook! She took pride in making delicious meals for her family and friends, making homemade flour tortillas for a family of ten on a daily basis. Guadalupe died at 7:12 p.m. on Saturday, July 3, 2021 at the home of her daughter, Janie. Her funeral services will be held on Monday, July 12, 2021 with the recitation of the holy rosary at 10:00 a.m. at St. Mary’s Queen of the Apostles Catholic Church, located at 4636 W. Dakota Avenue, Fresno, CA 93722. A mass will take place the same day at 11:00 a.m. with Christian burial following mass. Burial will be at Belmont Memorial Park.

The family of Guadalupe Ramirez Munoz created this Life Tributes page to make it easy to share your memories.

Send flowers to the Munoz family.