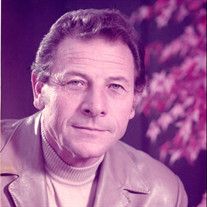 James Edward Casaccia Born August 22, 1924, to Edward L. Casaccia and Mary Soldani Casaccia, in Knowles, California. James passed away on April 20, 2022. He was a proud World War II Veteran who served in the Coast Guard from 1942 to 1946. He was currently married to Jeannie Casaccia for the last 31 years. James was previously married to Collen Benson Casaccia and had three children. James was the owner of Casaccia’s Art Memorials aka Casaccia’s Marble & Granite. He was the second generation as a Memorialist and Masonry Contractor running this business, which has been in Fresno since 1936 to current. He was also a 32nd Degree Mason, member of the Scottish Rite and the Shrine. He enjoyed his service in those organizations greatly and especially as a Clown in the Shriners. He was also a member of Lions Club and the Jesters. He and Jean enjoyed their time together cooking, camping, fishing, and spending time with their children and grandchildren. They especially enjoyed their time with their dogs Katie and Lacey. James was preceded in death by his parents, his brother Lee Casaccia, sister Pam Casaccia Lanfranco, and his daughter Leesa Casaccia Mauldin. He is survived by his wife Jeannie Casaccia; his son James Edward Casaccia Jr. and his wife Donna and grandson David; his daughter Janeen Casaccia Worland and her husband Robert; his granddaughter Tara Mauldin; his niece Paula Casaccia and nephews Ed Casaccia and Reno Lee Lanfranco. He is also survived by his step children and grandchildren; David Covert, his wife Diana, their daughter Candace Covert, their son Joshua Covert and his wife Aurora; Teresa Mogg, her husband Cliff, her son Kyle Kyger and daughter Kristen Kyger; Laura Callaway, her husband Chuck, her daughter Tiana Vergara, their sons Bryan and Conner Callaway; granddaughters Melissa Sawyer and her husband Joe and Jennifer Hurley and her husband David; and a total of seven great grandchildren. James will be remembered for his many friends and social gatherings, his family dinners, his crazy jokes, his enjoyment watching the 49ers and Giants games and so much more. He will be greatly missed by his family and friends. The family would like to thank Michael, Wayne, Bob and Debbie who were good friends and neighbors to both James and Jeannie. They would also like to thank the staff at The Windham and Athena Hospice Care in making his final days as comfortable as possible. In lieu of flowers the family would request a donation to your favorite charity. A funeral service will be held at Chapel of the Light Funeral Home on Friday, May 13, 2022 at 11:30 a.m. Entombment will take place in the Garden of Peace at Chapel of the Light Cemetery.

James Edward Casaccia Born August 22, 1924, to Edward L. Casaccia and Mary Soldani Casaccia, in Knowles, California. James passed away on April 20, 2022. He was a proud World War II Veteran who served in the Coast Guard from 1942 to 1946.... View Obituary & Service Information

The family of James Edward Casaccia created this Life Tributes page to make it easy to share your memories.

Send flowers to the Casaccia family.