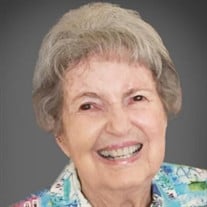 Jane Baker Willey went to be with the Lord on March 7, 2021. She died peacefully with the loving care of The Nazareth House and Hinds Hospice surrounded by family. She was preceded in death by her parents, Tina and Harry Baker, her brother David Baker and husband Fred Willey. Jane was born on December 8, 1929 and attended Fresno schools graduating from Fresno High School, in 1947. She often spoke about her happy childhood growing up in the San Joaquin Valley. Her parents moved to Fresno from Oregon in the mid-1920s. Her father Harry Baker, was prominent in the cotton business and a key figure in the growth of the valleys agricultural industry. Throughout her life Jane’s parents were involved in philanthropic projects on a local and national level. Jane graduated from UCLA with a degree in Psychology, was a member of the Kappa Kappa Gamma Sorority and a lifetime Bruin fan. After a year of graduate school she began working and had a blind date with Fred Willey. They were married in 1953. Fred managed the Fresno office of EF Hutton, and they enjoyed many business and pleasure trips around the world. They were married 50 years until Fred’s passing in 2003. Jane loved serving her community and did so in a variety of ways. She was a long time member of First Presbyterian Church Fresno, serving as a Deacon, Elder and bible study leader. She was a member of the Junior League, and served as President for a term. She supported Valley Children’s Hospital as an early board member and through her membership in La Feliz Guild. Her other volunteer pursuits included the PTA, The Fresno Metropolitan Museum Club, The Fresno Arts Center, Monday Study Club, Garden Club, and The Fresno Volunteer Bureau. Jane enjoyed being with her family and friends. Her favorite sport was tennis. She had a strong competitive spirit and liked to win! She was very passionate about Bridge and played regularly. Reading, needlepoint, and bible study were other favorite activities and hobbies. Jane was a deeply committed Christian and believed wholeheartedly in Jesus Christ as her Savior. She is now happily worshipping with the Lord and rejoicing in the Kingdom. Jane is survived by her three children and their families, Sara and Steve Pierson of Las Vegas, Fred W. Willey Jr. (known as Tad) of Del Mar, and Carolyn and David Johnson of Fresno. She leaves grandchildren Cristian Pierson, Tad Pierson, Pace Johnson and wife Allison, and Annie Johnson and fiancé Matt Kelly. Jane was blessed with three great grandchildren, Molly Pierson, Montana Pierson and Collins Johnson. Also Surviving is a cherished first cousin, Nancy Ferda. Heaven is surely a sweeter place with dear Jane in residence! She will be greatly missed by her family and friends. Memorial Services will be held at the First Presbyterian Church, 1540 M Street, Fresno, CA 93721 on Friday, April 2, 2021 at 11:00 a.m. Remembrances in Jane’s name may be made to First Presbyterian Church, 1540 M Street, Fresno, CA 93721, or Nazareth House Fresno, 2121 North First Street, Fresno, CA 93703.

Jane Baker Willey went to be with the Lord on March 7, 2021. She died peacefully with the loving care of The Nazareth House and Hinds Hospice surrounded by family. She was preceded in death by her parents, Tina and Harry Baker, her brother... View Obituary & Service Information

The family of Jane Baker Willey created this Life Tributes page to make it easy to share your memories.

Send flowers to the Willey family.