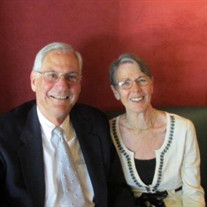 Jean Marie Ellsworth of Fresno, California, passed away on February 3, 2021. Jean had recently celebrated her 80th birthday. Jean was born in Santa Maria, California on January 15, 1941 to Carl and Mariellen Schilling. Jean’s family relocated to Fresno where she graduated from Fresno High School in 1958. Jean married her high school sweetheart, Dick Ellsworth, on November 7, 1959. Together they had two children, Steven and Kimberly. Jean devoted her life to her husband and children, often traveling across the country with Steven and Kimberly to relocate due to Dick’s career in Major League Baseball. Jean and her family resettled in Fresno in 1971. She spent many years enjoying volunteer work until taking a position at Saint Agnes Medical Center in the Admitting Department. She retired at an early age so she and Dick could enjoy their many travels to Europe, Australia, New Zealand, and Tahiti, to name a few. In 1998, Jean and Dick built their dream vacation home in Morro Bay, California. Jean loved walking on the beach, collecting sand dollars, entertaining family and friends, and gazing at the sunsets from their deck. Jean was predeceased by her mother and father, and her best friend and sister, Joann Schilling Crews. She is survived by her husband, Dick, and her children, Steven (Molly) Ellsworth, and Kimberly (Paul) Enos. She was a loving grandmother to Hillary (Jason) Conway, Matthew (lacey) Enos, Kevin (Lauren) Ellsworth, Blake (Taylor) Ellsworth, and Garrett Ellsworth. She is also survived by her five great-grandchildren, Parke, Sloane, Eleanor, Clayton, and Barron, and nieces and nephews. Family came first to Jean, a value she instilled in those around her. Her family will miss her laughter, her hugs, her smile, and her homemade pies. Condolence can be sent to the family at www.chapelofthelight.com. In lieu of flowers, please consider a donation in Jean’s name to First Presbyterian Church at 1540 M. Street, Fresno, California 93721.

The family of Jean Marie Ellsworth created this Life Tributes page to make it easy to share your memories.

Jean Marie Ellsworth of Fresno, California, passed away on February...

Send flowers to the Ellsworth family.