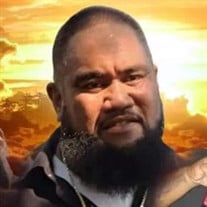 Jeffrey Solofua Amosa-Sewell was born on November 24, 1975 in Pago Pago, American Samoa and passed away suddenly on January 4, 2022 in Modesto, California at the age of 46. He was a devoted and loving husband, father, papa, brother, uncle and friend to all. Jeff graduated from Tafuna High School in 1993. He was proud of his Samoan heritage and he loved his land but something brought him to the United States in 1998. He played for the Fresno City College Rams Football team. It was during this time, he met the love of his life, Kiona, at the car wash on Olive and Palm. Since then, the two were inseparable and he loved spoiling her. Jeff continued his education and went to school to obtain his Class A Drivers License. He was so proud of becoming a hard working Truck Driver. He was also a sports fanatic, especially with football and baseball, the 49ers and San Francisco Giants were his teams. With his family's dedication for the love of football and sports, he loved rooting for and supporting his kids on the youth and high school fields. His favorite saying was "bang bang Niner Gang." Jeff was also famously known for his food concoction of "Birria/Posole Noodles." We also do want to forget to mention his beloved truck, who he lovingly called "Blue." He will be missed by his loving wife, Kiona Angelica Arechiga Amosa-Sewell; his children, Ruben Richard Rosas and his wife Adrina, Rianne Estella Rosas, Sinailoa Kiona Amosa, Jeffrey Michael Amosa, and Julian Pete Amosa. 2 beloved grandchildren; his parents Solofua and Kay Amosa, Penei Sewell and Adrienne Sewell, and Solagaliua Solaita and Fagaima Soalaita; his siblings Sheronne Sewell, Gabriel Sewell, Phyllis Amosa-Sewell, Michael Sewell, Leyonne Sewell, Penei Sewell, Susan Sewell, Adrienne Sewell, Randy Brown, Kim Sterchi and Kelly Brown. Visitation and Funeral Services will be held on Saturday, January 22, 2022 from 9:00 a.m. to 10:30 a.m. at the Church of Jesus Christ of Latter-day Saints on 5025 W. Ashlan Avenue, Fresno, CA 93722. A Family Service will follow at 10:30 a.m. and the Bishop's Service will begin at 12:00 p.m. Interment will follow at Fresno Memorial Gardens at 1:30 p.m.

Jeffrey Solofua Amosa-Sewell was born on November 24, 1975 in Pago Pago, American Samoa and passed away suddenly on January 4, 2022 in Modesto, California at the age of 46. He was a devoted and loving husband, father, papa, brother, uncle and... View Obituary & Service Information

The family of Jeffrey Solofua Amosa-Sewell created this Life Tributes page to make it easy to share your memories.

Send flowers to the Amosa-Sewell family.