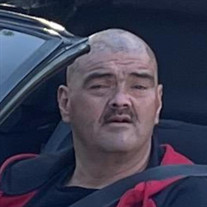 Jesse "Chewy" Flores was born February 21, 1972 in Fresno, California to Jesse and Gloria Flores. Jesse led a full life. Those who knew him will always remember him as a tough looking guy with a loud and hearty voice, laugh and a forgiving heart of gold. Loyal to a fault. Rarely could you find him sitting still even if it was the doctor's orders. He loved his cars, hi loud music and especially his family. We always knew when he was close, you could hear him almost a mile away. Jesse took after his father in so many ways. He was creative, crafty and paid attention to details making sure to leave some screws for his next project. It wasn't uncommon to find him working on cars or his grandfather's truck with a lit cigarette in his hand and a trail of oil letting you know where he had been. He took pleasure in getting lost in his work, whether it was renovating homes, painting cars or doing a side job for someone. Jesse gave it all he had. Jesse was a loving son, brother, grandson, father, grandfather, uncle, nephew, cousin and friend. Always a phone call away. Time didn't matter to him. It was only "Where you at? I'm on my way." His smile, hearty laughter and loud voice and even his grouchiness will resonate in our hearts and ears forever. Jesse left our arms and entered into eternal peace on April 1, 2021 in the presence of his mother. He was preceded in death by his father Jesse M. Flores, his grandparents Jesse Flores Sr., Angelo and Consuelo Ramirez and his aunt Marie Madrigal. He is survived by his mother Gloria Ramirez Flores, his brothers and their families, Anthony Flores, Jacob and Denise Flores, Christopher and Alexis Flores; his sisters and their families, Cathie Morales and Tina De La Torre; his daughter Feness Flores and his three grandsons Rayvon, Lacelle and Marquis; daughter Kassarah and her husband Anthony Martinez; daughter Amanda Flores, his son Adrien Llanes and grandmother Theresa Perez. As well as numerous aunts, uncles, nieces, nephews and cousins. Until we are together again, rest in the presence of Jesus Christ. Due to Corona Virus, we ask those attending to be responsible and maintain a safe social distance. Masks are a requirement. Please contact the family for restrictions and information.

Jesse "Chewy" Flores was born February 21, 1972 in Fresno, California to Jesse and Gloria Flores. Jesse led a full life. Those who knew him will always remember him as a tough looking guy with a loud and hearty voice, laugh and a forgiving... View Obituary & Service Information

The family of Jesse Angelo Flores III created this Life Tributes page to make it easy to share your memories.