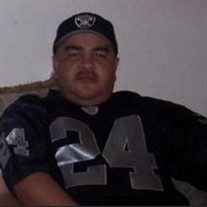 Joey Angel Mendoza was born July 26, 1974 to Joe and Cynthia Mendoza in Twin Falls, Idaho. He was the oldest of five siblings. He is survived by his three boys, Andrew, Frankie, and Stephen Mendoza, his three daughters Sarah Mendoza, and Alexandria and Natalie Holguin, as well as the mothers of his children, his two grandsons Julian and Jaxson Mendoza and another grandson on the way. His mother Cynthia Mendoza, his brothers Ralph, Victor, and Robert Mendoza, and one sister, Mona Mendoza. He grew up in Biola and was well known by everyone. As a child, Joey loved to bully his brother and sister and he would drive his Nana and Tata crazy. He had a love for sports and enjoyed watching them on tv with his son Andrew. Ge was a die hard Raiders fan. He enjoyed playing softball for many years. He also enjoyed barbecuing with his son Frankie and his grandsons. The one thing Joey didn’t enjoy was dancing because he didn’t know how to, but he would enjoy making fun of everyone else’s dance moved and would often imitate them. He enjoyed tormenting the neighborhood kids even as an adult whether is would be his family or neighborhood children in Kerman where his sons grew up. Joey was banned by his son Stephen from chaperoning school field trips because he would cuss and yell at the kids for walking too slow and in turn he told the teacher so they could get detention for not listening to him. This embarrassed his son Stephen but definitely a memory to be cherished forever. Joey was a character and very funny. He always had a story to tell, but you never knew what stories to believe, but he sure was great at telling them. Joey was known for giving nicknames, including his daughter Sarah AKA Doogs, who he loved very much. Joey was very happy that his love for softball was passed down to his youngest daughters, Alexandria and Natalie. He was very proud of them. Joey loved his grandsons dearly and promised to make it up to Frankie by spoiling them any chance he could get. Joey couldn’t do a lot of physical activities with his grandkids but he sure did buy them everything. He threw his grandson Julian a birthday party that would go down in history as the coolest party ever thrown in Biola. A party Julian will never forget. Joey will be missed by many people. You either loved him or hated him and he honestly didn’t care. We have so many memories and stories to tell we could go on and on but we ask that each time you eat a bowl of menudo and watch a Raiders game, you think of Joey Mendoza because he loved those two things on a Sunday morning.

Joey Angel Mendoza was born July 26, 1974 to Joe and Cynthia Mendoza in Twin Falls, Idaho. He was the oldest of five siblings. He is survived by his three boys, Andrew, Frankie, and Stephen Mendoza, his three daughters Sarah Mendoza, and Alexandria... View Obituary & Service Information

The family of Joe Angel Mendoza created this Life Tributes page to make it easy to share your memories.

Send flowers to the Mendoza family.