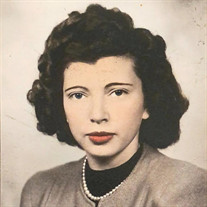 Kathryn Nadine Fike Born Feb 15th, 1929 Died March 10th, 2021 Kathryn was born in Red Oak, Oklahoma to parents Curtis Hall Adams and Elsie Marie Yancey. She had an older brother Ted. Her mother passed away when she was six. Her father remarried and had two more daughters, Nelda, and Elaine as well as a son Kenneth. She was proud of her Native American Heritage. Her Grandmother on her father’s side was a full blood Choctaw and Grandmother on her mother’s side was half Cherokee. Kathryn was raised by her Grandmother, Sirelda Jane Yancey on a rural farm near Red Oak. She grew up milking cows, feeding chickens, and picking cotton. She would ride with “Gran” in the family horse drawn wagon to town and get supplies. Kathryn’s childhood was not an easy one. She survived the dust bowl years in Oklahoma. The depression and tornadoes, one of which destroyed her school classroom. She was thrown about and severely injured her right leg. During high school she was a star basketball player. After graduating from high school, she left her family and moved to Oakland, CA with two girlfriends. She lived and worked in Oakland for a couple of years then moved to Fresno, CA. She eventually went to work at H.E. Verble Wholesale, where she met her future husband jack Warren Fike. The married on April 2nd, 1954. They would have two children Gary and Susan. In 1963 they took a big jump and purchased Acme Printing Co. and ran it successfully. In 1975 the purchased Kilners Office Products and merged the two companies. Kathryn was very active socially. She loved being with her family and friends. She loved to travel and see new places. Kathryn was always lighthearted and quick to laugh. Her house was the place for the family, friends, and especially the Grandkids. She was always there for anyone who needed help. Kathryn lived a full life of 92 years. A light has been dimmed in our family, but only until we reunite in the Glory of Heaven. She is survived by her son Gary and wife Rhonda, daughter Susan and husband Chris Schulte, Sister Nelda Derryberry, Brother Kenneth Adams, six Grandchildren, twelve Great Grand Children, and many Nieces and Nephews.

The family of Kathryn Nadine Fike created this Life Tributes page to make it easy to share your memories.

Send flowers to the Fike family.