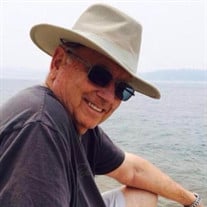 On Sunday, June 7 th , Larry David Weaver, loving husband, father of two, and Papa to two grandchildren, passed away at the age of 82. Larry passed peacefully after enjoying his nightly bowl of ice cream, sitting in his leather chair, dog and cat on his lap, while watching an old western movie. Larry was born on August 7 th , 1937 in Glendale, CA to Jack & Eula Weaver. At the age of three, after his father’s passing, Larry’s family moved to Alva, Oklahoma, where he would grow up and graduate from Alva High School in 1955. After college, Larry joined the Air Force in 1957 to serve the country he so loved. Being stationed in Rapid City, South Dakota, he soon met and married the love of his life, Connie Williamson, in Sturgis. After working for Builders Concrete for 25 years, Larry spent his extra time enjoying his family, loving on his grandchildren, tending to his backyard, as well as his roses and tomato garden. He loved to camp and fish, spend time in Shaver Lake with his family, where he taught his grandchildren how to fish. His gentle soul was adored by his animals, who followed him everywhere and would often curl up on his lap or chest. Larry was a connoisseur of ice cream, the Sunday funnies, old western movies, books about history and was a master of donut selection for special mornings. He was an outgoing, humble and friendly man who could talk to anyone, from any walk of life. Larry had a deep love for our Heavenly Father and often read his bible. He left behind a beautiful legacy of love and devotion to family. Larry is survived by his wife, Connie, of 61 years of marriage. He is also survived by his sister, Mollie Weaver of Tulsa, Oklahoma, daughters, Cydney Feemster and Allison Weaver, son-in-law, Brandon Feemster, and his two grandchildren, Hayden and Cailey Feemster. He will be laid to rest with his brothers in service and with military honors in the Black Hills National Cemetery, in the shadow of the beautiful Black Hills of South Dakota. Memorial services have been scheduled at New Hope Community Church in Clovis, on Saturday, November 14th, at 11:00 AM . If you are unable to attend, you may join the service via live stream here: https://www.newhopechurch.net/ In lieu of flowers, donations can be made in honor of Larry Weaver to K9's for Warriors online or by using this link: http://support.k9sforwarriors.org/goto/LarryWeaverMemorial

On Sunday, June 7 th , Larry David Weaver, loving husband, father of two, and Papa to two grandchildren, passed away at the age of 82. Larry passed peacefully after enjoying his nightly bowl of ice cream, sitting in his leather chair, dog and... View Obituary & Service Information

The family of Larry Weaver created this Life Tributes page to make it easy to share your memories.

Send flowers to the Weaver family.