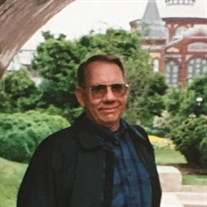 The first rule of our family camping trips was, “Leave the campsite better than you found it”. Dad carried this idea into so many parts of his life. You could see this in his work with the Masons and Kiwanis. He made a great Santa and enjoyed all the little ones that came to the Kiwanis Christmas Party for children with special needs. At church he sang in the choir, was a leader of the youth group, and served on several committees. He was a soft hearted and compassionate man. He was also funny and loved to kid around with people. However, he had a hard time getting a joke right. Here’s a favorite-clasp your hands over your head, spell “image”, and say lightbulb. You did it didn’t you? Well, dad would tell people to spell “imagine”, which caused some puzzled looks by people with their hand over their heads. Or maybe that was the joke. Our dad was Leonard George Babcock, Jr. He was born on October 10th, 1935, in Ellwood City, PA (to commemorate this, he wrote “Leonard’s Birthday” on the 10/10 squares on calendars everywhere). He graduated in 1953 from Lincoln High School in Elwood City, PA. For his Nurse Anesthetist training he went to the Pennsylvania Hospital School of Nursing and the Mayo Clinic School of Health Science, Anesthesia. He married the love of his Life and fellow adventurer, Sharon Babcock in 1957. He was a leader and pioneer in his profession. He was Chief Nurse Anesthetist at the V.A. Medical Center in Fresno and President of the Anesthesia Society-California Association of Nurse Anesthetist. He was also a board member of the American Association of Nurse Anesthetists. He has a published paper, “Malignant Hypothermia in the Operating Room”, in the Library of Congress. Early in his career he was involved in the forefront of heart, lung bypass surgery. He was also an Associate Professor at UC San Francisco Medical Center for anesthesia. We are all so proud of dad’s accomplishments in a field he loved. He achieved the rank of Lieutenant Colonel in the US Army and was honored to serve for a combined 27 years in both active and reserved duty. He was among the medical units in Dubai, UAE during Desert Storm. He was attached to the 828th Army Hospital in Fresno. He joined the army in 1958 and served at Letterman Hospital, at The Presidio in San Francisco. He was recalled twice to active duty. Travel was among his favorite things. He sang or was “medic” on several choir trips, sharing music and informal diplomacy all over the world. He and mom have so many memories and stories of these trips. He also enjoyed trips to Europe with family and friends. He did a lot of fun and unusual things and saw firsthand how people live in other cultures. One of the most exciting experiences was paragliding off a cliff in Switzerland! He loved nothing more than spending time with his family. He especially loved the Christmas season. Special Christmas traditions included-father daughter lunch and shopping for mom, decorating cookies (this sometimes turned into a bit of a contest), reading the night before Christmas, Christmas Eve services, opening Christmas pajamas on Christmas eve (until that turned in to socks and underwear), his childhood train under the tree, he loved to mold and paint Santas, and trimming the tree with old fashioned tinsel...one...strand...at...a...time. We were so lucky that everything we did, be it games, practices, band reviews, ceremonies, parades, we could almost always look out and find dad and mom. All of our friends loved dad and mom, in fact many of them called them “dad” and “mom”. A few also found it a safe place when they needed a place to stay for a day or two. We were and are the luckiest kids in the world. He is survived by his wife, Sharon Babcock and his children, Jennie Babcock and Dan Christenson, Leonard Babcock,III and Rachel and Matt Babcock and Dana, his Grandchildren Kristen, Michael, Nick, Hailey and great grandchildren Kerragan and Jillian. And also, his honorary children Sari, Brian, Nancy, Melvin and Linda, and grandchildren Rocky and Krissy. He was preceded in death by his grandson Tyler, his parents Mildred and Leonard, and his brother Barney and his sister Sance.

The first rule of our family camping trips was, &#8220;Leave the campsite better than you found it&#8221;. Dad carried this idea into so many parts of his life. You could see this in his work with the Masons and Kiwanis. He made a great Santa... View Obituary & Service Information

The family of Leonard George Babcock Jr. created this Life Tributes page to make it easy to share your memories.

The first rule of our family camping trips was, “Leave the campsite...

Send flowers to the Babcock family.