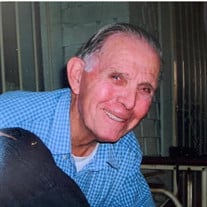 Lesley “Les” Brown, the last of the Brown family elders, passed away on Christmas morning, 2020, at the age of 94. Born on September 8, 1926 to Floyd and Mollie Brown in Coweta, Oklahoma, Les was the middle child of the siblings, with his older brother Wesley and younger sister Bernice. He was raised by his father and Grandma Casebolt, one heck of a stern lady. At the age of 17, Les joined the Navy to serve his country eagerly after Pearl Harbor. His two years of service on the USS Detroit would be some of his proudest. Throughout the following decades, he would often visit the local base, something that brought him much joy. Another notable event would be his baptism in the Arkansas River in 1947 at the age of 21. His faith would guide him throughout his entire life. This was a man who believed in God, Jesus, and heaven. Not long after, he met the love of his life, Helen, whom he would marry in 1949. They lived in Fresno, CA and went on to have four children- Elaine, Jeanette, Carol, and Darell. They were also blessed with 14 grandchildren and 19 great-grandchildren. Les was a true believer that he would be reunited with his honey, Helen, in their eternal life together. What a wonderful faith to have. Now his legacy; the really good stuff. Grandpa Brown was a man of his word, not always many words, but he was good and honorable. Rarely ever said “I love you,” but those who needed his love, guidance and support felt it through his actions and consistency in their lives. Anyone who knew him would speak of him with such respect, and how much they enjoyed his gift of storytelling and good old jokes. He was smart, funny, brave and a hard worker. He taught the men in his family how to be useful, handy and respectful. For the ladies, he set an example for them as how to be treated by their man. He was present and always willing to do what was needed. Whether it be to pull out the car for Helen whenever she wanted to make a trip to the store, take the grandkids to their first day of school, or help pick fruit from the trees out back, he was an example of goodness; the exemplary patriarch for our family. So here we had a man, a role model for so many, who loved his wife, led a life of faith, was dedicated to his family, and knew how to protect what was most precious to him. He was a family man. A simple man. The best of men. Although he will never be forgotten (how could he?), he will always be dearly missed. It’s a tough thing when you realize that the last of a generation, the last of his kind, the last grasp you have to a slower, more decent time…is gone. But we must remind ourselves that he will never be gone for the lessons he taught, the foundation he built, and the love he gave will be with us forever. Lesley Lee Brown 9/8/1926-12/25/2020

Lesley &#8220;Les&#8221; Brown, the last of the Brown family elders, passed away on Christmas morning, 2020, at the age of 94. Born on September 8, 1926 to Floyd and Mollie Brown in Coweta, Oklahoma, Les was the middle child of the siblings,... View Obituary & Service Information

The family of Lesley Lee Brown created this Life Tributes page to make it easy to share your memories.

Send flowers to the Brown family.