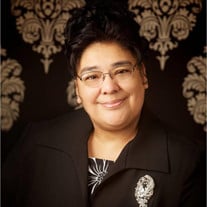 Linda S. Montes In her life, the number one priority was God. Her arduous work for Jesus Christ, her dedication to the woman’s ministry, along with her love for her family - inspired, impacted and empowered everyone who knew her. The legacy of love, service, and extraordinary servant leadership will continue on through the lives of those who knew her. Linda was often described as an exemplary teacher, giving, loving, hardworking, and who motivated those around her to live an intentional and purposeful life; ultimately to achieve the dreams that God had placed in their hearts. She believed in the gifts of the people who served alongside her and spent a lot of time developing leaders. Those who worked alongside her said she always rewarded the work of her team with recognition and a token of appreciation. Her biography is a narrative that tells the relevant events in her life and what God allowed her to achieve during the course of her leadership. Linda Montes was born in Long Beach, CA, to her parents Domingo and Erlinda Martinez. She grew up in a Christian home, with her father being a Pastor. On July 4, 1964 at the age of 12, she received the gift of the Holy Spirit and the same year on August 16 she was baptized in the name of Jesus Christ by her grandfather, Pastor Pedro Martinez in the church of Wilmington, Ca. At the age of 13, she taught her first class in Sunday School. Sister Linda attended the Western Apostolic Bible College (WABC) in Stockton, Ca for a few years. For a time, she lived in Lancaster, PA and New York helping with the new works that were beginning in the area. On June 12, 1971, she met young Pedro Montes and on October 21, 1972 they got married in Chicago, IL. Her last years of life she resided in Fresno, California where Bro. Pedro Montes was a Minister of the First Apostolic Church of Fresno. She is the mother of two sons, Peter and Timothy. And she was blessed by the marriage of her children, with her daughters-in-law Jennifer and Jeriann and five grandchildren: Brooke Madison, Lincoln Peter, Jayden Sonny, Levi Jackson and Zoë Kennedy. One of the things that gave her great joy was being with her grandchildren. She began her work with the Dorcas Women's Society, six weeks after getting married. Her first position was as local Treasurer. In 1977, while pregnant with her first child, she was elected Midwest District Treasurer where she served as Treasurer for four years and President for four years. Since then, the Lord gave her the privilege of being a Federation President in two other districts and serving as a local President for 18 years in different churches. She served as President of the Federation of Central California for 8 years and was the First President of the Federation of North Central California. She was a California State Certified Medical Assistant and was on the Dean's List when she graduated. It was in 2005 when she began serving at the national level, four years as Secretary and two as Vice President. In 2010, the Lord honored her with the privilege of serving as the ninth International President of the Dorcas Confederation of Women's Societies. In the course of her leadership she: • Established the National Walkathons approved by our counselor Bishop Leonardo Maffey and the General Board of Directors. • Celebrated the 40th Anniversary of the “Flor Azul” ministry in 2013. • Orchestrated our first national Heart and Soul conference outside of the state of California. Dallas & Austin Texas and Chicago, Illinois • Established and celebrated in 2016 the first “Aun de Pie” activity in Rancho Cucamonga and in Chicago, Illinois at our Heart and Soul conference. • Established the logo of Flor Azul, the Blue Flower. On December 22, 2020 at 5:30 in the morning, sister Linda Montes finished her race. We will remember her with warm thoughts and cherished memories, and our hope remains that we will see her again.

Linda S. Montes In her life, the number one priority was God. Her arduous work for Jesus Christ, her dedication to the woman&#8217;s ministry, along with her love for her family - inspired, impacted and empowered everyone who knew her. The legacy... View Obituary & Service Information

The family of Linda S. Montes created this Life Tributes page to make it easy to share your memories.

Linda S. Montes
In her life, the number one priority was God....

Send flowers to the Montes family.