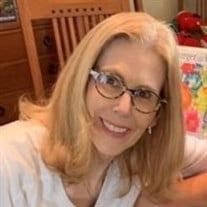 Margaret "Maggie" Casaccia February 28, 1950 - May 13, 2021 Fair Oaks, California - Margaret "Maggie" Anne Casaccia, a Fresno native and daughter of Frank and Wanda Brown (née Wikoff), passed away on May 13, 2021. Although she battled for many years against numerous serious illnesses, she passed in peace and beauty surrounded by loved ones. Born and educated in Fresno, Maggie settled in Silicon Valley in the early 1980s and pursued a successful career as a technical writer. A chance meeting on social media in 2015 led to her re-uniting with her close middle and high school friend and fellow Fresno native Ed Casaccia, after a 44-year absence. They married on August 20, 2016 and relocated to Fair Oaks, CA. Despite her many illnesses she was a beacon of joy for all around her and an unending fountain of love, a characteristic that defined her being. Her warmth and generosity endeared her to all who met her and enriched all the lives she touched. Maggie will be cremated, and her loving husband will serve as custodian of her remains until his own passing. At that time their ashes will be mixed and they will be interred at the Chapel of the Light Mausoleum and Columbarium in Fresno. They will join Maggie's family at rest along with Ed's grandmother and aunt, and will be across the street from Liberty Cemetery for veterans where Ed's parents rest. Our loss is beyond words, as is the loss of the entire world for the joy she gave it. She is survived by her adoring husband Edward Casaccia who is united in his grief with her former husband Robert Sun Lee, her stepdaughters Sarah and Libby, her dear nephew and nieces Chris, Mindy, and Minée, as well as her treasured sister-in-law Cigdem Brown who now lives in her native Turkey. We will be honoring Maggie with a donation in her name to Bay Area Cancer Connections and invite you to do the same. A memorial service will be held for Maggie at 11:00 am on Saturday, June 5th at Chapel of the Light, 1620 W. Belmont Ave., Fresno CA, 93728.

Margaret "Maggie" Casaccia February 28, 1950 - May 13, 2021 Fair Oaks, California - Margaret "Maggie" Anne Casaccia, a Fresno native and daughter of Frank and Wanda Brown (née Wikoff), passed away on May 13, 2021. Although she battled for many... View Obituary & Service Information

The family of Margaret "Maggie" Casaccia created this Life Tributes page to make it easy to share your memories.

Send flowers to the Casaccia family.