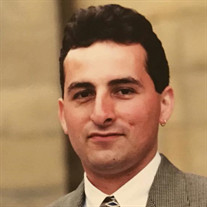 Michael Jon Gaitan was born on August 27, 1970 in Selma, California. He passed away peacefully at Fresno Community Hospital on October 31, 2021, surrounded by his family. Michael was 51 years old and also lovingly known as Mike, Mikey, and Mikos. He was the beloved son of Jesse and Olivia Gaitan. Mike was a loving and devoted son, brother, uncle, cousin and friend. He was spiritual, and enjoyed the outdoors, riding his Harley and watching his beloved Los Angeles Chargers NFL Football team, and being with his family and friends. Mike’s happiest time was successfully managing a sports bar in his hometown where he also bartended. He enjoyed bringing people together in a fun environment that he created with sports and music. Mike is survived by his mother, Olivia Gaitan of Selma, California, his brother Jess Gaitan of New York, New York, his sisters Elizabeth Gaitan (Vince Delgado) of Cincinnati, Ohio and Diane Gaitan (Tom Brady) of Selma, California, his nieces Ava, Aria, Bella, and Alexia and his nephews Max and Aaron. All will miss him very much. His father, Jesse V. Gaitan and his older brother Gilbert A. Gaitan precede him in death. Visitation will be held at Chapel Of The Light in Fresno, California on Tuesday November 9, 2021 from 1:30 until 3:30p.m, at which time and location recitation of the Roman Catholic Holy Rosary and funeral will be held. A Christian Burial and interment will be held at Floral Memorial Cemetery in Selma, California on Wednesday November 10, 2021 at 1:00pm. Mike cared for others and in keeping with his generous spirit, it was his decision to donate life so that others may live; his final act was to give the gift of life through organ donation. In lieu of flowers, the family requests donations in Michael’s memory be made to Donate Life California. Donate Life California 3940 Industrial Blvd. West Sacramento, CA 95691 (866) 797-2366 www.donatelifecalifornia.org Chapel Of The Light 1620 W.Belmont Ave. Fresno, CA 93728 (559) 233-6254

Michael Jon Gaitan was born on August 27, 1970 in Selma, California. He passed away peacefully at Fresno Community Hospital on October 31, 2021, surrounded by his family. Michael was 51 years old and also lovingly known as Mike, Mikey, and... View Obituary & Service Information

The family of Michael Jon Gaitan created this Life Tributes page to make it easy to share your memories.

Send flowers to the Gaitan family.