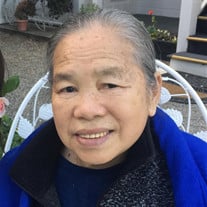 Phaeng Phanvongkham passed away peacefully on Saturday May 1, 2021 at the age of 75. She was born on March 6, 1946 in Meuong Burn, Houaphanh Province in Laos. Phaeng's beauty and superb culinary skills captured the attention of Somboun, whom she eventually married after their respective families exchanged blessings, chickens, silver and gold. Their love blossomed across the lush green hills and rice fields of Laos, and with some gold dust magic, resulted in six children. In 1983, Phaeng and her entire family immigrated to the United States and settled in Fresno, California. Phaeng had a passion for cooking the most delicious Laotian foods, including fiery hot thum mahk hoong, khao poon, various jaels (nahm bpah, bpah daek, etc), moak bpah, nahp bon, gaeng naw mai, luwakh pahk, soop pahk - you name it, she made it! If she was not busy whipping up a spectacular dish, you could find her watching her favorite television shows such as The Price Is Right and WWE. Wildly ecstatic contestants and pumped up wrestlers in spandex was all she needed for TV entertainment. More than anything, Phaeng enjoyed spending time with her family. She is preceded in death by her parents, Phomvong and Phon, and brother, Phommy. She is survived by her: husband, Somboun, and six children, Ken, Chan, Serm, Naung, Thouk and Pon; sister in-law, Naung Boua Daeng and family; brother, Charlie, sister in-law, Irene and family; brother, Phommisouk, sister in-law, Bouamala and family; daughters in-law, Vanh, Kim, and Courtney; bonus son in-law, Jeff; awesome grandchildren, Pouk, Gigi, David, Nina, Annie, Valerie, Ryan, Chris, Tyler, Kaitlynn, Kaylina and Izzy; and one golden great grandson, Landon. Phaeng was a beloved mother and wife, and she will be missed dearly by all of her family and friends.

Phaeng Phanvongkham passed away peacefully on Saturday May 1, 2021 at the age of 75. She was born on March 6, 1946 in Meuong Burn, Houaphanh Province in Laos. Phaeng's beauty and superb culinary skills captured the attention of Somboun, whom... View Obituary & Service Information

The family of Phaeng Phanvongkham created this Life Tributes page to make it easy to share your memories.

Send flowers to the Phanvongkham family.