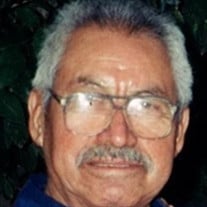 A Humble and Gentle Godly Man My Father Reynaldo A. Aguilar was born on March 22,1931 to Maria Andrade and Auellano Aguilar. He was born in the town of Bustamante, Nuevo Leon, Mexico. He had two younger brothers Manuel, of Sabinas, Nuevo Leon and Ramiro of Bustamante, Nuevo Leon- Deceased. At the age of 6 years old, he lost his Mother from childbirth and was raised by his Grandfather and Aunt. He went to school up to the 5th grade then worked in the family ranch attending to sheep and goats. In 1953, he decided that he wanted to come to the United States. He applied for a Permanent Legal Residence Card. In 1954 he was granted a permanent residence and he left home for the United States (Land of Opportunity). He never looked back to return to live in Mexico again. He began working as a farmworker in Washington, Oregon, Idaho, Texas, and his beloved California. On February 8,1959, he married Rosita C. Flores of Robstown, Texas. The newlyweds made their way West to Fresno, California. On January 15, 1960, they welcome a daughter named Maria Elena. On June 25, 1967, they welcomed a son named Reynaldo Jr. and on December 16, 1968, they welcomed a son named Bernabe. He was employed by Thompson and Hayward, a pesticide Company, from 1960 to 1967. He then went to work for Spreckels Sugar Company until retirement in 1996. He was known as AGGIE in Spreckels. My Dad was a hardworking man often doing the work of three men. He seldom complained about going to work and working all available overtime possible. Growing up Dad instilled the importance of an Education and of hard work. “Take pride in your work” he would tell me. He worked many hours of overtime to send us to Catholic Schools. I personally always wanted to make him proud and have him see the fruits of his sacrifice. He was a faithful husband, gentle Father but most important a Godly Man. In December of 1976, he gave his life to the Lord Jesus Christ. My Dad quit drinking and devoted his life to the Lord. In the 1995, my Dad became a US Citizen, my mom told him jokingly (now Viejo you got Blue Eyes). After the tragic loss of my Mother on March 14, 1999, he leaned on the scriptures for comfort. He always shared the Word of God and Prayed for any person that crossed his path. I remember seeing him seated outside early in the morning reading the Bible and the News Paper. I remember him driving home from Church one day and was stopped by the Police for swerving on the road. He explained to the Officers that he was adjusting something on the dashboard. I can not recall if he was cited but left with the Officer’s name in his Prayer Book. He was always sharing God’s Word and Praying for who needed Prayer. In Gospel of Luke 10:25-37 the Parable of the Good Samaritan. “But a certain Samaritan, as he journeyed, came where he was. And when he saw him, he had compassion. So he went to him and bandaged his wounds, pouring on oil and wine; and he set him on his own animal, brought him to an inn, and took care of him”. That describes my Father; he was a Good Samaritan. He would take the shirt off his back for a stranger in need. He kept his old boots hanging in the garage just in case someone needed a pair. If I look now, they might still be there hanging. Many times, when visiting Dad, there was always somebody staying at Dad’s house. He would say La Casa de los Corazon’s quebrados (house of the broken hearts). Many of JR or Barney’s friends who needed a place to stay due problems at home stayed at Dad’s house. He would share the Word of God and Pray for them. Some returned later to check up on Dad and bring a plate food for him. Dad loved his dogs. Everyone in the neighborhood knew my Dad’s house with many dogs. Many pets were left over the fence like a pigeon with broken wing, a blind white Rat, Turtles, Chameleon Lizard. We even had a pet Squirrel named Amy named after President Carters daughter and Dads favorite Duck which disappeared under suspicious circumstances. Many years later he learned what really happened to his Duck. Fonzie was Dad’s dog. A faithful companion to the end. Fonzie still waits at the gate for his return. Family was very important to Dad. He instilled in us to stay in touch with Cousins, Aunts, and Uncles. Known to many as Uncle Rey, Don Rey, Hermano Aguilar and Aggie. But to Barney and Me he was Dad. Grandpa to Steven and Vanessa. Great-Grandpa to Noelia and Aiden. My brother Barney took care of Dad 24/7 and I will be forever grateful. Just a small look into a long life of a Humble and Gentle Godly Man. Now Dad’s home with Jesus. Reunited with Mom, Jr, Big JR. See you on the other side of the fence. Love you Daddy. NOTE: Due to CoVid restrictions, please contact the family for attendance requirements. Furthermore, if you will be attending any event, MASKS ARE REQUIRED for entrance.

A Humble and Gentle Godly Man My Father Reynaldo A. Aguilar was born on March 22,1931 to Maria Andrade and Auellano Aguilar. He was born in the town of Bustamante, Nuevo Leon, Mexico. He had two younger brothers Manuel, of Sabinas, Nuevo Leon... View Obituary & Service Information

The family of Reynaldo A. Aguilar created this Life Tributes page to make it easy to share your memories.

A Humble and Gentle Godly Man

My Father Reynaldo A. Aguilar...

Send flowers to the Aguilar family.