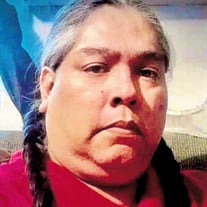 Robert was born August 14, 1967 to Jerry Douglas Ledger Sr. and Nancy Lee in Fresno, California and passed away April 10, 2022 in Fresno, California. Robert was from the Pomo Tribe and the direct descendent of Pah Mit (Bill Wilson) and of Tom Kit, who signed the treaty at Camp Barbor for the Dumna Tribe and was also of Chukchansi descent. He had worked for many many years to get the Dumna people recognized and home where they belong, which is now called Table Mountain Rancheria. Although heavily controversial, Robert never wavered on his stand. After high school he graduated from culinary arts and became a chef. He did work at multiple casino's until an injury and was asked to resign. Being a chef was his main passion. After healing, he put his main goal to help his people in the Native community. He always said "we have to take care of the elders and the children for their future". He always helped anyone who was in need the best way he could, even if it was his last dollar. He always said " give and don't expect it back because the Lord would always bless you in return". He was one who loved his family and would do everything to make sure they had what they needed and more. Robert was funny, kind hearted and passionate and loved everyone and always knew what you were going through, to help get you through any situation. He had so much family friends that he made along the way and would say " they are like my sons and daughters". He would call and keep in touch with so many people, just to talk about work, family or just life itself. He would play xbox to clear his mind, and thought he was rapper and would make up his own songs. Robert had impacted so many lives and will be deeply missed by so many who knew and loved him. Robert is preceded in death by both his parents, Jerry Sr. and Nancy and his brother Jerry Jr., his son Frank Vidal Cota, Jr. He is survived by his loving wife Juanita Patricia Ledger; his children Robert G Ledger Jr., Christine M. Ledger and companion Bob Walker, Joshua C. Ledger Sr. and his wife Macie and Jordan J. Ledger and his wife Marissa; his grandchildren Joshua Jr., Jesiah, Bobbie, Shiloh, Raelynn, Jeremias, Shyra, Jeremiah, Maylani, Mathias, Meliah and Maelene; his extended children and grandchildren he said were his, so many sons and daughters; his siblings John Ledger, Matthew Ledger, Elise Ledger, Mary Herrera Ledger and Shelly Wesley; his 3 brother in laws and 2 sister in laws as well as multiple nieces, nephews and extended frailly and friends.

The family of Robert George Ledger Sr. created this Life Tributes page to make it easy to share your memories.

Send flowers to the Ledger family.