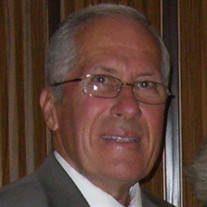 Roger Alan Lawson was the second son born to Olive Berneice Cox and Paul Wellman Lawson. He was born in Long Beach, California on April 6, 1940. His parents had been unable to have children for seven years. And then, in a miraculous way, both... View Obituary & Service Information

The family of Roger Alan Lawson created this Life Tributes page to make it easy to share your memories.

Send flowers to the Lawson family.