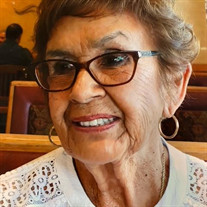 Rosalie Rita Gonzales (Rosie) passed away in Fresno, Ca. on December 4, 2020 at the age of 85. Rosie was born on December 18, 1934 in Fresno, Ca. to Serafin and Beatrice Verduzco. Rosie had two younger brothers, Tony and Rudy Verduzco and two younger sisters, Evangeline Diaz and Mary Cordova. Rosie outlived all of her younger siblings. Rosie attended Edison High School, but had to leave school early in order to help raise her younger siblings. Rosie was married to the love of her life Robert C. Gonzales “Gonzo” on December 30, 1955 until his passing on July 31, 2002. Rosie worked along side Robert as the two of them built Gonzales Farms, a very successful farming operation growing table grapes and tree fruit in the Fowler, Easton and Caruthers area. Robert and Rosie were inseparable and loved to travel. The two of them were entertaining to watch as Robert always knew what “buttons to push” to get a rise out of Rosie. Rosie was a loving and faithful wife, dedicated Mother, Grandmother and Great Grandmother. Rosie is survived by her two sons, Orlando and Ron Gonzales; her daughter Diane Dyer; Daughter in laws Jovita and Deanne Gonzales; son in law Jerry Dyer; seven grandchildren, Eddie Tovar, Lisa Darneal, Monique Montero, Jeremy Dyer, Janelle Hastings, Christian and Jordon Gonzales; and fifteen great-grandchildren. Rosie was a devoted Christian and served as a Sunday school teacher for many years teaching young children about Jesus. Rosie loved Jesus Christ and could be heard throughout the day saying “thank you Jesus”. Rosie was considered to be a Saint by those who knew her. Rosie was a prayer warrior who prayed without ceasing for family and friends, and those going through difficult times. Rosie was a very generous person who gave sacrificially of her time and money. She could always be counted on when there was a need to be met. Rosie cherished her children, grandchildren and great grandchildren and served as a powerful Christian example to them all. Rosie touched the lives of so many people along the way and she will be forever be missed by those who knew and loved her. We love you Rosie. We love you mom. We love you abuelita. Due to Covid restrictions only immediate family will be allowed to attend the services. Memories and condolences can be sent to Orlando, Ron and Diane at 5447 E. American Ave., Fresno, Ca. 93725.

Rosalie Rita Gonzales (Rosie) passed away in Fresno, Ca. on December 4, 2020 at the age of 85. Rosie was born on December 18, 1934 in Fresno, Ca. to Serafin and Beatrice Verduzco. Rosie had two younger brothers, Tony and Rudy Verduzco and... View Obituary & Service Information

The family of Rosalie Rita Gonzales created this Life Tributes page to make it easy to share your memories.

Send flowers to the Gonzales family.