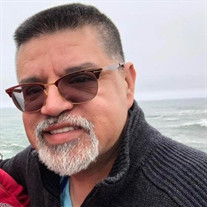 The day that God called Rudy Tobar home it was so much more complicated than just a man leaving Earth. The world lost a friend, a coach, a dj, a brother, a tío, and his favorite title Dad. From his unrivaled ability to put a mix tape together to his smooth moves on the dance floor, his laughter filled the room and his smile couldn’t be ignored. He loved people, whether blood related or not when he chose you, you knew he would have your back for life. He grew up in Fresno, CA for majority of life wrestling and excelling in school, math was his specialty and later on that would carry him into his 20 plus years of computer technician work. Early on in life Rudy held family as his number one priority which showed true when he met and married the mother of his children in his twenties. Rudy leaves behind two children, Joshua (31) and Gianna (25). Joshua spent his childhood with his dad playing football, having dance offs, and cracking endless jokes. Rudy never missed a single football game or track meet and endlessly cheered on his son from the moment Joshua came into his life. Gianna can remember her countless daddy-daughter dates with her dad growing up. Movie dates were always a must and usually following a busy week of her pops coaching her in softball, being the president of her elementary’s school PTA, and bringing her & her best friends lunch to school for no reason other than to see his babygirl smile. In the early 2000’s Rudy went to trade school and took his computer knowledge to the next lever becoming certified as a computer technician, where he never stop learning and taking new certifications several times a year. In 2005 Rudy and his family moved to Oregon where he started a 16 year career at Symantec and made countless friends who turned into family. In 2018 Rudy followed his company & career to Utah with his daughter Gianna, where they spent two years making memories with more snow than either had ever seen in their life. After his 16 year career at Symantec came to an end Rudy once again packed up with his partner in crime, his babygirl who he affectionately nicknamed “boogaboo” and they moved back to his hometown of Fresno, CA. The last several months of Rudy’s life was spent back home in Fresno where he was happiest, spending time with his cousins turned brothers Joaquin & Mike and countless other family members. Rudy was generous, kind, sweet, funny, loving, and genuine. He was the life of the party everywhere he went and so very many people are mourning the loss of such an incredible presence in these difficult circumstances. Lastly, Gianna, Rudy’s daughter would like to remind everyone that her dad would want everyone to celebrate his life, the fun, the memories, and how much he loved all of you. “Much Love Mi Gente” As Rudy always said.

The day that God called Rudy Tobar home it was so much more complicated than just a man leaving Earth. The world lost a friend, a coach, a dj, a brother, a tío, and his favorite title Dad. From his unrivaled ability to put a mix tape together... View Obituary & Service Information

The family of Rudy Tobar created this Life Tributes page to make it easy to share your memories.

The day that God called Rudy Tobar home it was so much more complicated...

Send flowers to the Tobar family.