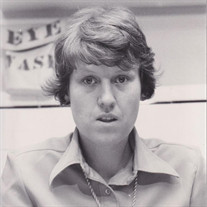 Shirley Anne Kovacs, 75, of Fresno, passed away on March 23, 2022. She was born January 21, 1947 in Berkeley, daughter of Emeral Wayne Hull and Inez Baumgartner Hull. Shirley has fond memories of gardening, fishing, and camping with her father,... View Obituary & Service Information

The family of Shirley Anne Kovacs created this Life Tributes page to make it easy to share your memories.