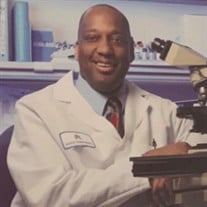 DR. SIDNEY ETHAN CARPENTER was born May 3, 1964, to the late Sir Lafayette Carpenter, Sr. & Mattie Mae Jane Carpenter in Los Angeles, California. Sidney joined Greater Ebenezer Missionary Baptist church in Los Angeles at an early age and was baptized on December 3, 1972. Sidney was a member of the Greater Ebenezer Missionary Baptist Church’s Monday Night Youth Ministry, First Aiders Ministry and Youth Choir. Sidney spent many years in the Boy Scouts of America. In his adult years he would say one of his greatest accomplishments was becoming an Eagle Scout. Sidney also spent much of his spare time with his brother Terrance camping, hiking and exploring. The two were inseparable. Sidney graduated from Los Angeles Center for Enriched Studies in 1982 and was accepted in Medical School at UCLA. He graduated from UCLA in 1986 and went on to obtain his medical Degree from the University of Irvine, California in 1992. Upon obtaining his medical license, He taught as an Associate Professor in the School of Medicine & was subsequently employed as a Pathologist at Kaiser Permanente in Fresno, California where he worked for over 20 years. Sidney was well known, well respected & well admired for his knowledge of medicine. The University of California, San Francisco, Fresno Latino Center for Medical Education and Research awarded Sidney with a Doctor of the Year award in 2009. Sidney studied dance and performed with many organizations. Sidney lived life on his own terms and he touched the hearts of so many. When he was not at work, He entertained & brought smiles to others at work & the local community with his skill of Dance. Known as the “Dancing Man,” He brought joy & inspiration to so many. He loved the nature & outdoors & had traveled to several national-nature sites. He especially loved the Yosemite National area where he hosted many reunions for his family. Sidney married his best friend, Sonhai Hackett on March 8, 2016. He was preceded in death by his father, Sir Lafayette Carpenter, Sr., His mother, Mattie Mae Jane Carpenter, his brother, Robert Carpenter and his mother-in-law Ardis Hackett Banks. He leaves to cherish his earthly presence: His husband, Sonhai Hackett of Clovis, California; His brothers, Rev. Sir Lafayette Carpenter, Jr. (Faye) of Wendell, NC & Terrance Elbert Carpenter(Apple) of Los Angeles, California & His sister, Alisa Jane Carpenter-Williams of Durham, NC; His aunts, Elsie Hodge-Bridges of Upper Marlboro, Md & Elaine Hodge-Shelton(Bob) of Raleigh, NC & His uncles, Nilous E. Hodge (Elaine Williams-Hodge) of Raleigh, NC; & Mack & Sidney Carpenter of Zebulon, NC; as well as a host of nieces, nephews, cousins, friends & co-workers. He will be truly missed. Services are pending for a later date.

The family of Dr. Sidney Ethan Carpenter M.D. created this Life Tributes page to make it easy to share your memories.