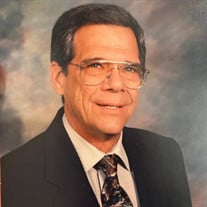 Tom passed away peacefully on July 21st, 2020 into the loving arms of Jesus after a long and courageous battle with ALS. He was born in El Centro, California in 1942 and moved to Fresno when he was 6 months old. He graduated from Bullard High School in 1961. After attending college and the passing of his father in 1973, he became the President of Air-Way Farms, Inc. and several other affiliated companies. Tom retired from farming in 2008. He is preceded in death by his parents, Mal and Martha Carberry and his brother Don Carberry. He is survived by his loving wife Marshelle, his daughter Cheri and her husband Brian and their children Emilie and Juliana. He is also survived by his son Mark, his wife Alison and their children Bennett and Elise. He was very proud of his family and considered them his greatest blessing from God. During his retirement, Tom enjoyed traveling with his wife and family, working in his workshop, and keeping busy with numerous hobbies. He had a great sense for how things work and seemed to be able to fix anything. Tom will be remembered as a kind and selfless person with a positive attitude. His sense of humor and company will be greatly missed. Special thanks to Peggy Lopez for her unwavering compassionate care and support to the family, and to friends and relatives for their love, prayers and support during this difficult time. The family also extends thanks to: Dr. Hutchinson, Amdal In-Home Care, Hinds Hospice, and Sally Phillips. A public viewing will be held at Chapel of the Light Funeral Home on Wednesday, July 29, 2020 from 4:00 p.m. til 7:00 p.m. Due to the Corona Virus, private services will be held. In lieu of flowers, donations can be made to Pilgrim Armenian Congregational Church (3673 N. First Street Fresno 93706) , Hinds Hospice (2490 W. Shaw Ave. Unit 101 Fresno 93711) or to the donor’s favorite charity. “For God so loved the world, that he gave his only begotten Son, that whosoever believeth in him should not perish, but have everlasting life.” John 3:16

Tom passed away peacefully on July 21st, 2020 into the loving arms of Jesus after a long and courageous battle with ALS. He was born in El Centro, California in 1942 and moved to Fresno when he was 6 months old. He graduated from Bullard High... View Obituary & Service Information

The family of Thomas Jay Carberry created this Life Tributes page to make it easy to share your memories.

Send flowers to the Carberry family.