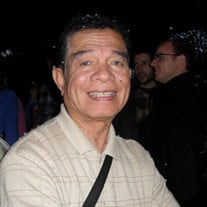 Virgilio Paras Tayong was born on January 10, 1938, to Manuel Tayong and Evarista Paras Aguilar in Manila, Philippines. He passed away on June 2, 2020 at Kaiser Permanente Medical Center in Fresno, CA. He was 82 years old. Virgilio’s passing was just 4 days shy of his 50th Wedding Anniversary and 3 days shy of meeting his 6th grandchild. Although unaware at the time, Virgilio met his future wife in the Philippines. He was later reintroduced to the love of his life, Orlanda Alfarero, through mutual friends in Canada and were shortly married on June 6, 1970. They would go on to have 3 beautiful children. Virgilio loved tennis, singing, ballroom dance and flying. An airplane enthusiast ever since he was a child, Virgilio joined the Philippines’ Air Force ROTC at an early age. His first important job was working for a mental hospital in the Philippines which lead him to a position at a hospital in Canada. Later, he studied and trained for a position with Bell Canada. He eventually moved to Fresno, California, where he owned and operated board and care homes for the elderly. He provided care for many patients over the years. He later followed one of his dreams of owning and operating a Philippine Mini Mart in Fresno. Virgilio leaves behind his loving family- wife Orlanda Alfarero and 3 wonderful children James Neil of Las Vegas, NV, Marilyn Joy of Mission Viejo, CA and Coreeliza Julie of Mission Viejo, CA. He has 6 beautiful grandchildren, James Neil Jr., Tylee Jade, Trystan James, Tyler Sy, Alexandra Joy and Aubree Luna. He is survived by his sister Corazon Tayong Roxas of Canada, half sisters - Angelita Aguilar Dela Cruz of Canada, Josefina Aguilar Briones of Philippines, Ludivina Aguilar Serednick of Canada and adoptive sisters Nellie Ramos Esperazante and Mercy Ramos Dela Cruz of Canada. He is predeceased by his parents, sister Zenaida Paras Tayong, half brother Eduardo Paras Aguilar and adoptive sister Erlinda Ramos Baltazar. He will be missed by his extended family and friends in the U.S, Canada and the Philippines. In lieu of flowers, the family asks for donations to Papa Tayong Memorial Fund (https://gf.me/u/x76ari).

Virgilio Paras Tayong was born on January 10, 1938, to Manuel Tayong and Evarista Paras Aguilar in Manila, Philippines. He passed away on June 2, 2020 at Kaiser Permanente Medical Center in Fresno, CA. He was 82 years old. Virgilio&#8217;s... View Obituary & Service Information

The family of Virgilio Tayong created this Life Tributes page to make it easy to share your memories.

Send flowers to the Tayong family.