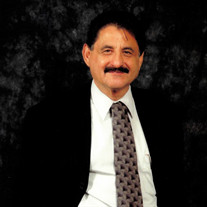 Ralph A. Flores was born in Ciudad Juarez, Chihuahua Mexico on December 21, 1942. He was known by many as “Don Rafael.” Ralph was a leader in the Hispanic Community in the Central Valley for over 60 plus years. He began working as a bus boy and later become a banquet manager for the Hacienda, here in Fresno Ca. Soon after leaving the Hacienda, he become a Union Leader for the culinary, cooks, bartenders, and hotel service employees for Local 62 and served as their Secretary of Treasurer for nearly 30 years. During his time as a Union Leader Ralph was also President of the Comité Cívico Mexicano and the Fiestas Patrias, which provided entertainment in the Downtown Fresno Area that celebrated and represented the history of his Mexican Culture. Not only was Ralph a natural born leader he was also an entrepreneur and opened various furniture stores in the Fresno Area as well as in San Bernadino Ca. Ralph retired from the furniture business and began to work as a private investigator for the Law Offices of Paul Grossman. Ralph’s real passion was public speaking and was given the opportunity to host a radio station for 20 years with the sponsorship of the Law Offices of Paul and Dennis Grossman. During his years as a radio host for El Voz Del Pueblo he talked about various topics that consisted of race, religion, politics, local and global events. Ralph was a humble man who had a strong faith in God and religion, he was a self-made man who always gave back to the Hispanic community, specially to the youth so that they had the opportunity to pursue a higher education. He was predeceased by his father, El Comandante, Guillermo Flores and his beloved mother, Soledad Arroyo. As well as two siblings, Guillermo Flores and Edna Mei. He is survived by his wife Eva Flores and his four children: Eldest Daughter Gabriella Jaramillo and her husband Luis Jaramillo and their four children, Graciela, Luis Jr., Lora, and Serena. His daughter Carmen Flores, his only son Rafael Jr. and his youngest daughter, HannaLiza Calles and her husband Humberto Calles and their sons, Humberto II, Nickolas, and soon to be born son Rafael. He was the eldest brother of Fernando Flores, Manuel Flores, Felipe Arroyo, Maria Elena Coleman, Maria Ester Elixavide, Soledad Flores De Herrera, Connie Wilson-Velasco, and Willie Flores. Ralph was also a stepfather to three children and 6 grandchildren. Rafael Flores will always be remembered as La Voz Del Pueblo.

Ralph A. Flores was born in Ciudad Juarez, Chihuahua Mexico on December 21, 1942. He was known by many as &#8220;Don Rafael.&#8221; Ralph was a leader in the Hispanic Community in the Central Valley for over 60 plus years. He began working as... View Obituary & Service Information

The family of Ralph A. Flores created this Life Tributes page to make it easy to share your memories.

Ralph A. Flores was born in Ciudad Juarez, Chihuahua Mexico on...

Send flowers to the Flores family.